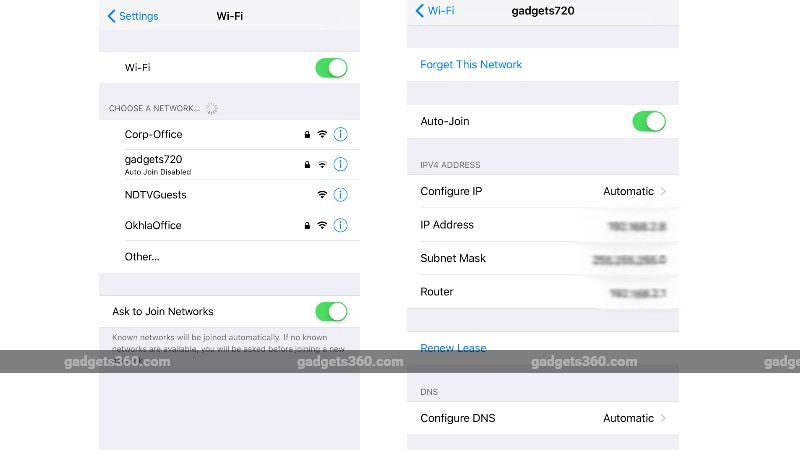 iOS 11 is in beta currently, and is set to be released with the iPhone 8 this fall. The developer and public betas are laden with improvements, and one of the most recent iOS 11 developer beta reveals that Apple has included a feature that stops iOS devices from automatically connecting to spotty Wi-Fi networks.

A Twitter user going by name Ryan Jones first spotted this feature, and Gadgets 360 can corroborate these claims. The latest developer betas of iOS 11 automatically disables auto-join as soon as it detects a spotty public network. This prevents your phone from connecting to spotty public Wi-Fi connections without any warning. The fact that it is being tested in iOS 11 beta hints at its arrival in the stable version of iOS 11 as well.

This feature essentially looks to keep your browsing and data experience smooth and non-jarring. It won’t just connect to any local public Wi-Fi without any warning. These public Wi-Fi connections are often slow and non-responsive, and the sudden switch to these networks in the background jars your app refresh, or page load without you knowing the reason what happened. You can of course enable Auto-Join by pressing the ‘I’ icon next to Wi-Fi signal in Settings -> Wi-Fi.

Android has had a similar feature for a while, and even Samsung has introduced this with Smart Network Switch which automatically gets your phone to shift to mobile network when the Wi-Fi signal turns scrappy. Another feature spotted in iOS 11 Developer Preview is the introduction of native live streaming functionality. This feature is only accessible by registered developers, with the option to ‘Start Broadcast’ seen in iOS 11 beta 3. With the ability to start a live stream on your iPhone or iPad on the go, one could wonder if Apple is starting its own broadcast service akin to Twitch, YouTube, and Microsoft’s Mixer. What’s more likely though, is tying it into existing services.

For some public newtworks they don’t allow you to join as well. Google is giving away free internet in some Indian Railway stations known as Rail Wire and I am unable to join it using my iPhone because it thinks that is not secure! I don’t have the option to make the phone join.
You must log in or register to reply here.
Share:
Facebook Reddit Pinterest Tumblr WhatsApp Email Share Link
Top