Why is Tata Sky bundling OTT and promoting its Binge+ set-top box?

Every year, during the Indian Premier League (IPL) broadcast, Tata Sky tends to catch the eye with its commercials. This year, the direct-to-home (DTH) giant is promoting Tata Sky Binge+ set-top box (STB) with an Ogilvy-created ad that communicates about seamless toggling between television and video-on-demand (VOD) content. The ad ends with, 'Isko Laga Dala Toh Puri Family Jingalala.'
According to the Telecom Regulatory Authority of India (TRAI), Tata Sky has an active subscriber base of 22 million. Gone are the days when the set-top box was used just to get access to TV channels. With Reliance Jio and its giga fiber promises, all the DTH players now have over-the-top (OTT) video streaming services bundled as a value-added service with the television connection.
Tata Sky's Binge+ set-top box is available in the market for Rs 2,999. The company defines it as a feature-packed box.
By paying Rs 299 per month, Binge+ set-top box users can get access to Disney+ Hotstar Premium, Zee5, Voot Select, Voot Kids, Eros Now, Hungama Play, Sun Nxt, and ShemarooMe. By paying an additional Rs 129 per month, users can get access to Amazon Prime Video too. Not just subscription, the box aggregates the content in one interface, which means that the users don't have to log in to each app separately.
But, who is the box for and is Tata Sky moving away from its core offering, which is live television? Anurag Kumar, chief communications officer, Tata Sky, talks about the box, the campaign and the target audience.

Most features in this box are already there in a smart TV. Are you targeting those who don't own a smart TV? Also, talk a bit about the target audience.
This box is targeted at anyone who has an Internet connection at home, as that is required to access OTT content. People are interested in watching content that is not just on TV, but also on OTT (platforms).
The content-hungry family likes to explore different types of shows and movies. This (box) goes beyond people who have smart TVs, or don't have one. Yes, if you don't have a smart TV, this box makes your TV smart.

What is in it (the box) for those who already have a smart TV?
First of all, the remote of the box comes with a voice assistant, which is not there in most smart TVs. People are not interested in the box… They want access to content. So, we have bundled a lot of the apps together in a value for money (kind of way) for the customer.
This enables the customer to switch from app A content to app B content seamlessly, which otherwise is a struggle. This is something you can't do with smart TV, where you need to subscribe to each app individually.


Tell us more about the bundle, how does it work?
We have one user interface, where you have content from Zee5, Disney+ Hotstar, Zee TV, Republic TV altogether, and the customer can toggle. Basically, it is an aggregation, even at the level of discovery.
Is Binge+ a box for the Tata Sky subscribers in metro cities?
We have seen some sales from smaller towns. What is happening across the country, and mostly due to the lockdown, is that people are getting some sort of an Internet connection at home... The moment the Internet reaches home, the ability to connect to other things also expands.
Hence, this box is finding an audience beyond metros and top cities. Yes, the metros remain important markets for this box, but towns with a population of below five lakh have also shown interest in this product. 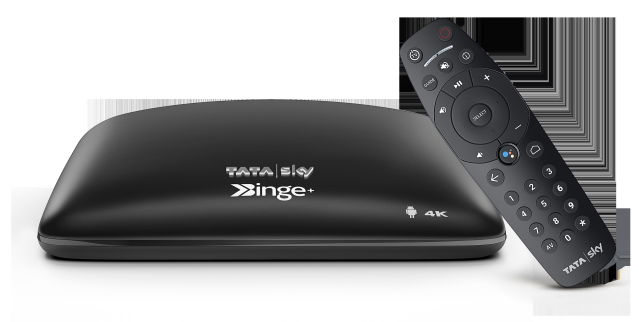 Have we reached a stage in India where OTT is one of the key aspects (if not the most important one) when it comes to video content consumption?
With this box, we offer a good bundle of OTT content. We will continue to expand our offering in partnership with the platforms. I see OTT consumption growing faster than that of television. However, we must remember that all of this growth in OTT consumption is coming from a very small base.

Television is not going away anywhere in the next 10 years. Once the IPL starts, all the eyeballs shift to TV. People still prefer to watch cricket or any other sports on TV, even if they have a high-speed Internet connection at home. We believe that the bulk of the market will remain a TV-only one, while in some segments, people will increasingly become hybrid consumers, and the segments will grow.

Was it a strategic decision to promote the Binge+ box during the IPL?
Now IPL, and after that, we have the big festive season, starting with the Durga Puja, Navratri, to Diwali and others... these tend to be the largest season for durables, TV viewing, etc. Hence, we thought it is very relevant to actually place the box on the screens, as people are evaluating the idea of either purchasing a TV (Internet) connection, or upgrading the set-top box.

Do you think this will end up being a box for the tech-savvy?
At the core of our thought process, we had the person who watches TV. It is why we have used an interface that the conventional TV user is accustomed to. The purpose is to ensure that we are hand-holding the TV customer and helping him to explore, not just TV, but also OTT.

That is why we have Zee and Zee5, Disney+ Hotstar and everything else on one interface. This box has been designed to cater to the larger mass of people. Those who may only be on TV today, but would also want to explore the OTT side tomorrow. We don't think this is complex and for the tech-savvy.